MADE BY TEENS FOR TEENS!

Yo, yo, yo, TWNers, welcome back to another post from yours truly. Today, I’m going to be talking about not one but TWO awesome books that are going to be release in September. (Because, I keep forgetting to talk about this other one and today is cover reveal day for the amazing E. K. Seaver, so y’all get twice the bookish announcements, which is a good thing because I am SO stoked for these two releases!!!) BUT FIRST, I do have some really quick announcements I need to make. The first one is: the winning authors who will have their works featured in TWN’s Imagine anthology will be PUBLICLY ANNOUNCED this MONDAY, JULY 12TH!!!!!! So be sure to catch that post and congratulate all the talented authors!!! I must say, a lot of y’all surprised me. EVERYONE’s story was simply fantabulous and I can’t wait until we get to share them with all of y’all. So if you’re not already following TWN, I do highly recommend doing so, so you don’t miss out on any of the awesome updates about Imagine as we’re moving forward. More details will be coming soon. 🙂 The second announcement is, as I’m some of y’all may have noticed (shout out to Lorelei for being the first to mention it–she’s awesome, y’all. Nuff said!!!!!) I have a new story up on my progress bar (to your right on computers, at the bottom on other devices). So did that mean I finished In Pursuit of Hope? Uh… no. It means, I just wasn’t in love with In Pursuit of Hope anymore and I felt that I really needed to focus on something else. But I do plan to talk more about my new wip, In Healing Hands, and why I decided to work on it instead soon. 🙂

Alright, now, onto the post. I’ll give y’all my second bookish announcement first because I know you’re dying to see this gorgeous cover and, well, it’s fun keeping y’all in suspense. (That means you are NOT allowed to scroll to the bottom of the post and sneak a peek at the cover. It’s not fun that way… *cough* even though that’s what I always do on cover reveal posts… *sheepish smile* Trust me, the wait is WORTH IT!!!!!!!!) Anyway, I kinda kept forgetting to mention this awesome bookish announcement which is why I’m putting these two book news in one post. So my totally awesome, amazing, best friend and writing twin sister, who did I mention is totally awesome and a superb writer, blogger, friend, and well, this list is getting long but y’all get the point… wait, where was I? Oh, right! My awesome friend, Grace A. Johnson IS RELEASING A NEW SHORT STORY IN SEPTEMBER. 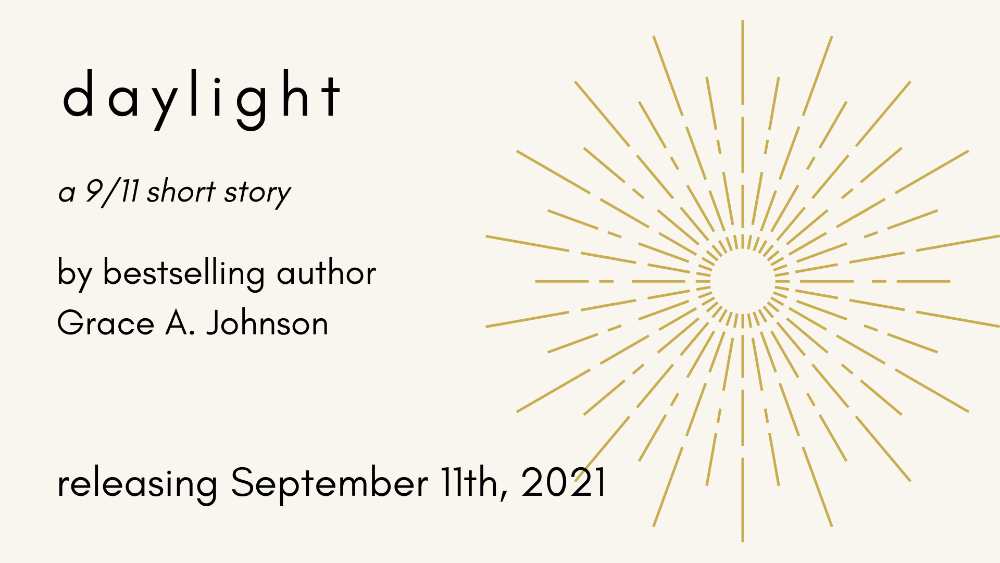 I did not mean for that graphic to be that big, but, hey, we had to make sure we all got this awesome news!!!!!!! And here’s another graphic. 🙂 Which is also turning out really big. *shrugs*

But anyway, this is a 9/11 short story that releases on September 11th in honor of the 9/11 events 20th anniversary. All I can say is that I am SO EXCITED for this book’s release, which once you read this blurb, you will be too!!!

It was too late.
The whole world knew it, the nations shaking their heads at the fallen United States, our beautiful country of hope and freedom covered in blood and ashes.
Only the devil could’ve planned something so disastrous.
Only God could save us now.
Only God could save August.
It was all my fault that he nearly lost his life, dashing back into the hailstorm of debris to save a man who was already dead. I can only hope that he’ll recover—that we will recover.
Because some things will never be forgotten.

Look, even Darth Vadar agrees with me!!!! And now it’s time for y’all to see the cover, right?

Hehehe, did y’all really think I’d give it to ya that easy. XD Nope. Instead you’ll get the blurb for this novella!!!

Nothing, not even the creepy house in the woods, can dissuade Ly O’Dare from finishing this scavenger hunt. Where else can a broke seventeen-year-old get enough money to finance her art endeavors and start a business?

Even being snowed in with a sarcastic stranger isn’t too bad, and as long as he is helping her find the hidden staircase, she’ll tolerate his quips.

Jackson Evergreen’s quest was something he had been preparing for his entire life. And now he’s finally at the end of it, so close to saving the world when he gets snowed in with a bubbly blonde named Ly. The house is more dangerous than either of them prepared for, though, and Jackson’s suddenly thrust into a situation he didn’t intend to get in and is falling for a girl he only just met.

One thing they know for sure, however, in this house, nothing is what it seems.

Now it’s time for all the links. Here’s a link to the author’s website. And here is a link to the book on goodreads, so you can add it to your tbr shelves and all that good stuff. And here is the link for you to go ahead and preorder your copy for this YA fantasy novella.

I could do the dash thingy

and I’m trying something new

Dashes are waaaay easier though

I don’t have to

think of a lot

but when I want to ramble

I can’t think of

I should show y’all

I shall take that

See. I told ya the wait would be worth it!!!!! Don’t you just love that purpley color and the font is just magnificent AND the key and lock and all that awesome stuff!!!!!

So, guys, talk to me in the comments!!! What do you think of the cover? Who’s excited for Johnson’s short story and Seaver’s novella? Who wants to learn more about my new wip? Better question, who noticed I had changed my book on my progress bar? Do you know of any awesome book releases coming in September? Who are some of your favorite indie authors? Who’s excited for Imagine? Until the next post…

Keep on being awesome and never stop writing!

Issabelle Perry is a devout follower of Jesus Christ and an extroverted, slightly crazy, teenage published author of YA fantasy. On the rare occasion when she's not plotting and pursuing her next story idea, you can find her reading, blogging, graphic designing, searching the web for odd facts about the middle ages, hunting for Narnia in wardrobes, or envisioning herself wielding a magnificent sword (but due to her clumsiness, let’s hope that never happens). This self-proclaimed exclamation mark enthusiast and obsessed fan of LOTR and The False Prince (by Jennifer A. Nielsen), is a co-founder of Teen Writers' Nook where she and her sisters are dedicated to motivating and supporting young authors. What she's probably doing right now is fangirling about her favorite books to random people, trying to figure out how to fit the five new books she bought on her overflowing bookshelf, or scanning the pantries for chocolate.

Leave a Reply to Grace A. Johnson Cancel reply

“Everybody’s got a little crazy in them. Jest make sure it be the right kind of crazy.”

(The Vault Between Spaces by Chawna Schroeder)