Before we get started I just want to give the HUGEST THANK YOU to all of you wonderful readers who signed up to join my beta reading team for Heir to His Crown. When I first put the post up, I was thinking oh, wouldn’t it be awesome if I could get like ten readers, but I only thought I’d get about five. Guys, so far I have 24 readers who have signed up. Like all of y’all are just a HUGE blessing to me and it means beyond words that 24 people would wanna read something li’l ole me wrote. THANK YOU SO SO SO SOOO MUCH!!!! Also, it’s still not to late to join the team. Sign ups are open until the 24th, so be sure to get your spot today! Read more here!

Now, let’s dive into the post for today. First I’m doing this AWESOME collab with the AMAZING, INCREDIBLE, Kristianne from Whimsical Wanderings!!!! *applause fills the blogosphere* Y’all NEED to check out her blog and follow her right o’er here! Today I’m going to be sharing my writing process with all of you!!! Make sure to check out Kristianne’s site for the post where she shares her own writing process as well. These posts are really fun because it is SO cool how each writer has his/her own unique writing process. . Well, let’s do this!

It all starts with that spark! Basically, the first question or idea that a new story could grow from. I’ll turn the idea over in my head for a few days/weeks/sometimes months, thinking plot and storyline over. Oftentimes I’ll be doing this while I’m in the middle of another book, so I know what to start next after I’ve completed that. So where do I get these ideas from? Honestly, ideas come from everywhere, but to be a little more specific….

INTO THE LAMP: The idea for this story first came to me when I was watching this movie with my fam. In the story, there was a kid who found a genie and it had more of a modern setting. Around this time, I had gotten really into Disney’s 2019 Aladdin movie. I mean, how could you not?

At the same time, Katherine had done this drawing of a girl genie dressed in pink, and I remember as the movie I watched with my fam ended, I had one thought: What if a teenage boy found a teen girl genie? And that thought moved to many thoughts: What if this girl genie was a “girly-girl”? How would the boy react to that? And that started the idea for Into the Lamp – my YA contemporary retelling of “Aladdin”!

HEIR TO HIS CROWN: So I had read this book once, and I just really didn’t like it. (In case there’s any fans of this series reading this, I shall refrain from stating what the book was.) However, I did like the idea of the princess in the story reclaiming her throne that had been overthrown and really wanted to write a book that basically fixed this book. (Yes, I’m that kind of writer. 😉 ) But, every time I got an idea it ended up being WAAAY too similar to that book. BUT then as I was watching Lord of the Rings and Aragorn was having to reclaim the crown of Gondor, it hit me! The problem with my story was that I was trying to write about a princess taking back her crown, and I kept reverting to that other story subconsciously. BUT if it was a prince instead, I would branch off and write my own story. And that’s what I did!

WHAT LAY BEYOND THE WOODS: Well, this story has a, er, complicated back story. I first got the idea sometime after reading the Ascendance Series by Jennifer A. Nielsen. I was sad to have the story finished, so I thought it was time to get to work on a novel set in the middle ages. I did some research into the middle ages and found some interesting information about serfs, and it gave me this whole story idea surrounded around Mawdelyn (and orphan girl) and Luther (a serf). Now, I know what yer thinking, where’s Robyn Hood. While, obviously the plot has changed drastically from my first couple of started but never finished drafts. After reading The Merry Adventures of Robin Hood by Howard Pyle, I decided to do a Robyn Hood retelling and What Lay Beyond the Woods came to be. .

Now, after I get that spark, I’ll normally do very minor plotting here. Basically this is where I lock myself in my room for hours and act out my entire story from beginning to end. (Just kidding, I normally do this over a few days/weeks and I actually do it during every spare moment I have, brushing my teeth, eating, when I’m supposed to be writing, etc.) Soooo long story short, I have always loved acting. I say I’m a decent actress and have done a lot of skits/plays at my church before!!!!!!!! Well, it’s just like me to find a way to incorporate acting with my writing. I’ll seriously “act out” just about every scene in my novels. (Which is why I’ve gotten a few bruises from the fight scenes…hey, no one said writing was easy. XD) (Fun fact: because I started Heir to His Crown during a writing competition, I actually skipped this part and have been going full-blown pantsing!!!!! Well, for the most part.)

This comes the part where I throw out all sanity and write until my heart’s content!

Now because I didn’t write any of my “plotting” ideas down, I truly end up forgetting them. All I know is an idea of the beginning, the ending, and a few awesome scenes in the middle. (Mainly, it’s only the really cool and/or important scenes that stick out.) So, when I sit down to write my first draft, I will often repeat step two while writing. What I mean by that is I will write chapter one, two, and three. Then while I’m working on these, I will be acting out what is going to happen in four and five. And so on until the end. (#PansterAllTheWay) I tend to write mostly neat, very fast first drafts. I can write a first draft in a month if need be, but I mostly try to range about 1-4 months for first drafts. Into the Lamp took me five months to do both first and second drafts. Heir to His Crown is probably only going to take four months on the fist draft, but writing’s been slower than I want with school and all. What Lay Beyond the Woods will probably take me the rest of my life. XD

Now, after draft #1 is completed, I’ve normally already started number two. (Note: I normally don’t do these writerly things in the smart and wise way.) Sometimes I will be sharing the earlier chapters with people who have asked to see it and then I’ll be sending the second draft to beta readers!!!!!!!! I generally don’t do more than three drafts, just because the thought of a fourth draft is just

but I do continue to edit my final draft a lot. Like how I recently finished edits for Into the Lamp and have been doing some more edits.

This is when I will send my story out to literary agents and stuff. Annnnnnnnnd then get a pile of rejections. But, hey, what mattered is that I tried, right? 😉 Hopefully one of these days this will be the spot for the publication process,

Well, that’s all I have for you today!!! THANK YOU SO SO SOOO MUCH for reading and don’t forget to leave your thoughts in the comments on your way out. 😉

So in the comments lemme know: How many drafts do you do (or aim to do)? Have you ever completed a novel? (If not stay tuned for May when we have an awesome gal guest posting with tips to help you make it to the end of your novel.) Which of the three novels I talked about you’re most interested to read: Into the Lamp (YA fantastical contemporary retelling of Aladdin) Heir to His Crown (YA medieval fantasy) or What Lay Beyond the Woods (YA medieval reimagining of Robin Hood)? 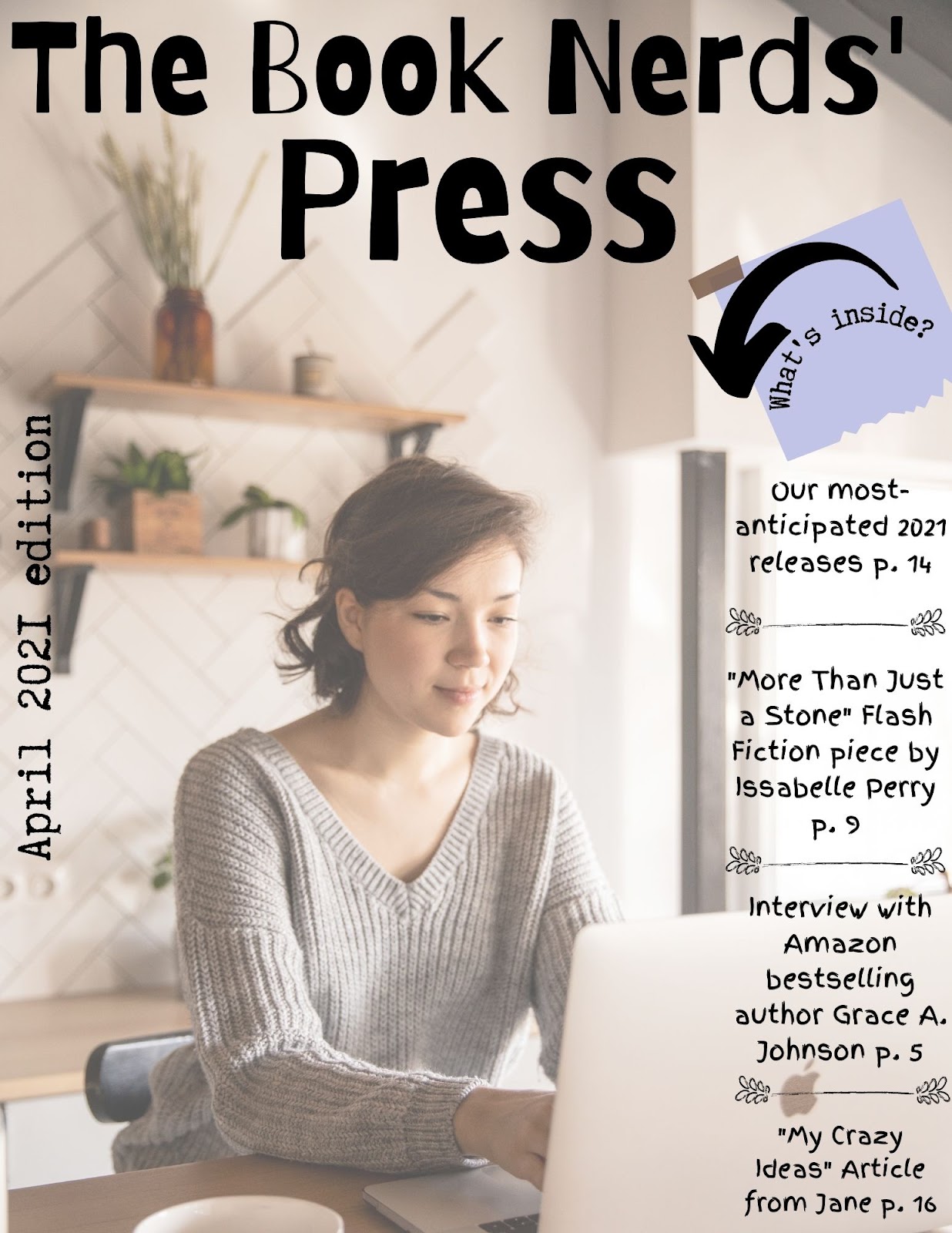 Oh, and also, I’VE STARTED UP AN ONLINE MAGAZINE WITH MY FRIEND JANE!!!!!!! Eeekk!! It’s called The Book Nerd’s Press and its about all things bookish!! It’s a monthly magazine and you can download and read the first edition here: The Book Nerds’ Press .

Issabelle Perry is a devout follower of Jesus Christ and an extroverted published author of YA fantasy. In her spare time, you can find her reading, blogging, graphic designing, bullet journaling, hunting for Narnia in wardrobes, or envisioning herself wielding a magnificent sword (but due to her clumsiness, let’s hope that never happens). Issabelle is a Skillet Panhead, LOTR and The False Prince fan, and a self-proclaimed exclamation mark enthusiast. Her work has been featured in the Change the World anthology, and she is the editor for the Imagine Anthology. What she's probably doing right now is fangirling about her favorite books to random people or scanning the pantries for chocolate.

“Doing something is more right than doing nothing.”